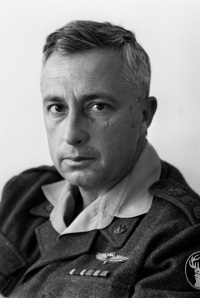 Ariel Scheinermann, better known to the World as Ariel Sharon, was one of the most relevant political figures, within the 20th-Century. He was a celebrated Israeli military man & politician, while also being classified as a grand nemesis & nuisance to all his Arab neighbors. Now, there has been a lot of talk, surrounding this man’s death, from his supporters & adversaries, alike. However, what’s even more important than his controversial position, as a hero to some & a tyrant to others, is the fact that this man died, a very dilapidated death, one in which he had been in a vegetative state for nearly a decade.

One may ask, naturally, if they opposed him, “Who cares?”, while others may very well morn for him & his family. But, the point that I want to get at is what does his death mean for him. Now, we all know that as Muslims, they way that we live, in the Mundane, will be a direct-result of how Allah will judge us, in the Hereafter. This man Ariel Sharon has died & is with his Lord now, being questioned within his Grave, as to what he was like, as an individual, within his Earthly life.

We need to take serious lessons from the deaths of him & people like him:

1. He didn’t die as a Muslim, which Allah requires all that have freewill to do so: “Oh, you who believe!!! Revere Allah, revering Him is correct; and do not die, except as Muslims.” (Noble Qur’an: Chpt.3, V.102), “Whoever chooses a Path, other than Islam, it will not be accepted from him; and, in the Hereafter, he will be among the Losers.” (Noble Qur’an: Chpt.3, V.85).

2. He was an active-participant in the oppression of other Human beings, the same reasons as to why Nazi-Germany is in the history-books as being tyrants, likewise, the State of Israel has done many of the exact same atrocities to the Palestinian People, as well as in other nations, just like how Nazi-Germany had done during World War II.

3. He was directly responsible for the carnage in southern Lebanon, back in 1982, C.E. (the year that I was born), in which he (personally) commanded Israeli military personnel into the sovereign nation of Lebanon, in order to increase Israel’s political/military dominance within the Middle-East.

Allah states some very important things, within the Qur’an, about killing people and/or being responsible for the unjustified deaths of others: “Whoever kills one who has killed none, nor has caused corruption within the Earth, it’s just as though they’ve killed the entire Human-Race.” (Noble Qur’an: Chpt.5, V.32), “And, do not kill one who Allah has made sacred, except with Justification. And, whoever is unjustly killed, We’ve made his heir empowered. So don’t overdo killing; verily, he is assisted.” (Noble Qur’an: Chpt.17, V.33). Taking all of that into consideration, regardless of how you feel towards, against this man, these are the raw-facts, Islamically. Now, here’s another element of his death which I completely disagree with: Muslims, People generally, celebrating the fact that he has died. This honestly makes me angry, and I’ll tell you why. As Muslims, regardless of how a person dies (i.e. regardless to whether they die as Muslims or not), even if they die fighting against the Muslims, as adversaries, there’s still a certain level of respect that anyone/everyone whom is a Human being is entitled to, by virtue of them being Humans. Here’s the proof for what I’m saying: Muhammad (Peace be upon him) was informed of some of his Companions (May Allah be pleased with them) mocking `Ikrimah (May Allah be pleased with him), the son of `Amr ibn-Hisham (AKA Abu-Jahil), one of the most-hated of the enemies of Islam & the Muslims, at this time, who was confirmed to have died as a Disbeliever, during the Battle of Badr, one whom even Muhammad had dubbed “The Pharaoh of this Nation” (). Guess what? Muhammad had put an end to this mockery of `Amr, in order to make  at ease & so that he would not have to be reminded constantly of the fate of hi sown father, in the Hereafter, which hurt him significantly. In fact, Muhammad actually said, as a result of this, “Insulting the dead causes grief to the living, and does not reach the dead.”.(Companions of the Prophet)

So, in the Muslim-World, when there are reports of People celebrating the death of this man, are we really that happy that yet another Human being didn’t die upon Islam? Does that make your day, sort-of-speak, knowing that another Human being didn’t capitalize on the opportunity to be with Allah, within the Paradise? Does that make you feel good, knowing that these People, and People like them, whom Allah describes, will be from among the Losers, on the Day of Standing? Do you really think that that’s a cool perspective to have: mocking People who didn’t accept Islam before their deaths? Is this something that you find comical and/or amusing? If your answers to any of these questions are yes, then, we have some serious problems, as an Ummah/Nation.

Instead of being happy, elated, at the spiritual misfortunes of others, we need to be more like Muhammad, who cared about every single person that he encountered, and wanted the best for them, not the worst for them. He was never celebratory whenever he heard the news of someone during his lifetime whom didn’t die as a Muslim, because, as a Recipient-of-Revelation, he knew fully well that not dying upon Islam isn’t a joke, it ain’t nothin’ funny or cute, or amusing about it. Yet, sadly, we, as Muslims, seem to get joy out of hearing the news that People die upon other than Islam. We need to really correct this perspective; I’m basically out of words with regards to this issue.

1. The Palestinian people, the Muslim Palestinians anyway, have not made the issue of Palestine a religious issue-They’ve only made this an ethno-national issue, while forgetting that Palestine is the long-lost sector of the Muslim-World. So, like any & every part of the Muslim-World, it belongs to all of the Muslims, not just some, just like how Makkah, Madinah, and Jerusalem are not at all the properties of the respective countries that hold present jurisdiction over these sacred religious-sites, rather in truth, they are the properties of the Muslim-World. But, very few, if any Muslim-Palestinians, Muslim-Arabs, or Muslims in general, view the issue of Palestine in this way at all. This is based upon a statement from the Prophet Muhammad (Peace be upon him), when he said, “The Muslims share three things: Water, Fire, Land.”.(Abu-Dawud) This refers to any and all places where the Islamic-State has ruled/formerly ruled, places where there is a modern government which is presently run either mainly or totally, by other Muslims, as well as any & all natural resources available in these respective places, by religious default, all of the above, are the global-properties of the Muslims. But, unfortunately, again, most Muslims just don’t get it.

2. The Western-World really doesn’t want the Muslim-World to reunite, under any circumstances, which would, by default, tamper with the geo-political/financial dominance & interests of the Western-World, in the Muslim-World, particularly the Arab-World-The main reason why the United Nations even allowed the State of Israel to exist in the first place was to serve as a satellite-nation, to monitor & keep the rest of its Muslim/Arab neighbors under military pressure, which has worked significantly over the past six decades. And, the Western-World is not just going to give up its most prized satellite-nation, Israel, for the sake of giving justice to the Palestinian people.

3. The Muslim leaders in the Muslim-World/Arab-World are too greedy for wealth, power, position, influence on the world’s political stage, etc., to concern themselves with the needs of their fellow Muslims, who have been oppressed for the past six decades, which actually stem from the ancestors of the modern leaders of the Muslim-World/Arab-World revolting & helping to topple the Ottoman Empire, the last official, globally-recognized ruling-body of the Muslim-World to date, which no one wants to really talk about. This is how the Western-World was able to get the Muslim-Arabs to revolt against the Turks in the beginning, via the promise of autonomous self-rule.But, in actuality, they’ve become geo-political boy-toys to the Western-World, so because the Western-World has so much dirt on them, it’s like they can’t really stand up against the tyranny of the State of Israel & the Western-World, without first admitting to the fact that they are, in fact, majorly responsible for the formation of the State of Israel, via rebellion against the Ottoman Empire, which had control over Palestine at the time of World War I-Of course, after their defeat, in World War I, one of the conditions of surrender was that the Ottoman Empire forfeit all former territories, outside of modern-day Turkey, to the Allied Powers, which, of course, included Palestine.

4. If a Palestinian state were in fact established, they would have a lot of bones to pick with a lot of nations, like their Muslim/Arab neighbors, who basically left them hanging for damn near a century, while they’ve been systematically displaced, oppressed, marginalized, and made into the most popular group of refugees in Human history.